Tales from the Dark Side--And the Light - A Creative Challenge

Sometimes in between books I love to play and give myself a challenge.  For today's challenge I've chosen a picture and will attempt to write a short piece from the dark side of my nature and then from the light side of my nature.  If all goes well, I may continue this--just for inspiration.  Care to join me?  Post your dark or light tale in the comments section. 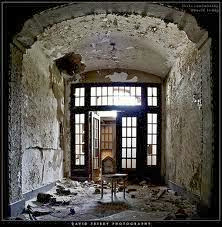 "Wecome to your new home, sweetheart."

His words were almost drowned out by the pounding of my heart as my eyes widened, taking in the crumbled concrete, litter strewn floor and single chair in the middle of the room. The scream that rose from my chest choked off midstream. There was no place for it to go.  He'd stuffed the gag tightly inside my mouth, tying it in place with the dirty red bandanna he'd taken from Terry's body before he tossed it over the bridge. He'd killed him with one swift plunge of that horrible looking knife he carried at his waist. And now he was going to kill me.

He pulled me further into the room, his crippled bony hands cold against my skin. "I don't bring all my girlfriends here. In fact, you're the first."  He brushed my hair away from my face as his laughter echoed through the long hallway. "But you won't be the last."


FROM THE LIGHT SIDE:

"This may not be such a good idea, Jenna."  Terry eyed the crumbling old building before turning his attention back to me. "From the looks of that place it could collapse at anytime now."

Taking his hand I pulled him toward the steps.  "Don't be silly.  It's made of concrete and brick.  The only way it could possibly collapse is if we had an earthquake and according to the weather bureau there's none on the horizon.  Besides that's where Mama Pearl went, so that's where we're going.  Sarah has to sleep tonight."

I hoped I sounded a lot braver than I felt at the moment.  Darn Mama Pearl for putting me in this predicament anyway.  Terry and I had been searching for her kittens for almost a week now. We'd followed her all over the neighborhood and Sarah had cried herself to sleep every night for the past week.  We had to find them today.  There might not be any earthquakes on the horizon, but the weatherman was predicting a massive blizzard and I knew if we didn't find the kittens soon they would freeze.

We picked our way carefully through the litter strewn hallway to the double doors at the end. The wind outside was picking up, creating a mournful howl and rattling the windows.

"We'd better make this quick," Terry pushed the door open wider. "The snow is on its way, and I definitely don't want to be trapped here when it hits."

"Shh...," I whispered, listening intently. Somewhere within the howl I'd heard the slightest of mews. "Did you hear that?"

Terry shook his head. "I didn't hear anything."

Squeezing through the doorway I stopped just inside allowing my eyes to adjust to the darkness.  The sound came again from a far corner. "There."  I pointed across the room to where Mama Pearl's bright eyes glowed from the darkness.  Taking a step forward I stopped when the board beneath my right foot crumbled and crashed to the floor below.  Terry grabbed me from behind, pulling me backwards.  "We can't go in there, Jenna. It's too dark and too dangerous."

I knew he was right, but I also knew I couldn't leave Mama Pearl and kittens here to die.  Sarah would never forgive me. Kneeling I called out to her and held open my coat. "Come on, Mama, bring the kittens to me.  We have to get them some place safe and warm."

She meowed once, long and low.  I continued to kneel as she came toward us, a bundle in her mouth.  I took the tiny kitten from her, placing it inside my jacket as she moved gingerly back across the floor.  It took four trips before her meow told me we had them all.

"That was amazing." Terry cuddled two kittens inside his jacket, close to his heart.  "Are all cats like that?"

Picking up Mama Pearl I placed her inside my jacket with the other two kittens.  I couldn't wait to get home and show them to Sarah.  "That's what all mothers are like.  It's getting late we'd better run for it."


Wow, it took a lot longer for me to do something in the light than it did in the dark.  The dark just rolled.  And I might even look into incorporating that into a real story eventually.