Posted by Linda S. Prather at 8:22 AM No comments: 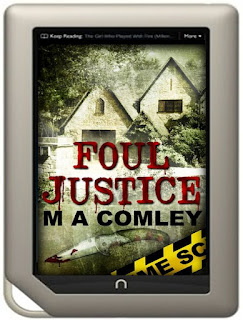 Posted by Linda S. Prather at 9:20 PM No comments: 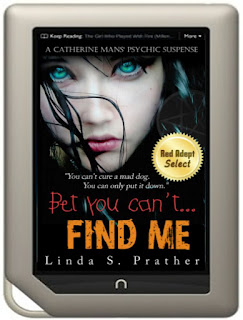 Yea, though I walk through the valley of the shadow of death, I will fear no evil: for You are with me…
But He wasn’t with her.
She leaned against the cold steel door, her eyes closed in prayer. “Father, why have you forsaken me? What sins have I committed that you would punish me this way?”
When you spread out your hands in prayer, I will hide my eyes from you; even if you offer many prayers, I will not listen. Your hands are full of blood.
“Fiank-o!” she screamed.
Her eyes flew open, and she spread her hands in front of her. Blood rimmed her manicured nails. Out of the corner of her vision, she saw the blood-soaked blouse plastered to her chest. So much blood for such a tiny body.
Ripping at her blouse, she mewed like a wounded animal. “Then take my eyes, so I no longer see the blood of my child on my hands. Take my ears, so I no longer hear the shrieks from below, the clanging of the chains.”
Silence met her cry. God was no longer listening. She sank to her knees and ripped at her hair, bordering on madness. How could they do this to her? Had she not served them well for more than ten years?
“You know what you must do, Aggie. I have seen the feux-folet. She is the child of Diablo, and she has cursed you.”
For a moment, rage blocked the pain squeezing her heart. “You!” Her eyes filled with hatred, fists clenched at her side. “You brought this upon us with your superstitions and your curses.”
“Mwen pòv zanj pèdi—you know I speak the truth. I was here when she was born without life, her body blue, her soul already beyond this world. Five years have come and gone. As she grows, so does the evil. They warned you this day would come.”
The old woman’s words washed over her like a river of ice, extinguishing the fire of her rage, leaving only a cold, still emptiness.
“I begged them, Mother. Begged for her life as her blood seeped through my fingers. I have served God, and I have served the spirits. But they have forsaken me.” She raised tortured eyes to beseech the old woman, her efforts met with stony silence and beady eyes filled with accusation. “I begged them!” Her voice tapered to a whimper. “She is only five. I have lost Catherine. Must I lose Mary also?”
The old woman knelt beside her. Taking her right hand, she pried open the fingers and closed them around the cold steel of the knife. “You can’t cure a mad dog, Aggie; you can only put it down. You disobeyed. You have been punished. Now pick up your cross, and carry it.”
The silence in the room was broken only by her whimpers; the old woman had left as quietly as she’d come. The knife lay heavy in her hand, just as the task before her lay heavy on her heart.
She rose and opened the door to the basement, ignoring the shrieks and clang of the chains. Her feet descended the steps slowly, the old woman’s words echoing inside her head: You can’t cure a mad dog, Aggie; you can only put it down.

Please don’t leave me here.
Catherine Mans heard the whisper over the rustle of the leaves. He was here. She knew it, but her time to find him was running out. A heavy mist had begun to develop over the river, drifting up the ravine into the creek where she knelt beside the water. Her search for twenty-one-year-old Timothy Bond had led her to many ravines in the past two weeks. Her visions were confusing, pieces of jigsaw puzzles that seemed to fit—and not fit—every creek area surrounding the Kentucky River.
Letting the cool water flow over her hand, Catherine closed her eyes. She paid attention to the gentle force as it pressed against the barrier, allowing herself to connect with the emotions it contained. He’d been here. Walked this bank. Trudged through this water. And he’d never left.
“Catherine?”
She heard Cody’s unasked question and rose. “He’s here, Cody. I can feel it.”
“The fog is rising fast. I’m going to call off the search and bring everyone in.”
His voice held an edge of defeat bordering on disappointment. He’d followed her over snake-ridden banks, through shallow pools, and even into the river twice. She knew he ignored the ridicule of his fellow officers, but he couldn’t ignore the rising wind, misty rain, and fog swirling into ghostly clouds. Failure to call off the search would put everyone in danger.
Catherine turned back to the pool of water and stared into its murky depths. A vision of Mr. and Mrs. Bond appeared, arms wound around each other, eyes swollen and red, beseeching her. We know he’s dead, Ms. Mans, but we can’t sleep at night. Not until our boy comes home.
The not knowing was what aged you overnight, placing dark shadows beneath your eyes, deep-etched lines upon your face. The sorrow emanating from Mrs. Bond’s eyes had touched her in a way she hadn’t expected, opened the door to memories of things she’d worked hard to forget. Catherine touched the scar just above her right breast and wondered if her own mother had looked that way when Catherine had run away.
Catherine shook off the thoughts. Now wasn’t the time to think about her mother. Or the past. Nor was it the time to allow the frustration in Cody’s voice to discourage her. She knew he respected her abilities and believed in her. A smile played around her lips. A lot had changed in the six years since he’d knocked on her door and asked for her help in finding three-year-old Danny Wells. Cody had worked hard to become the head of the homicide division, and through his efforts, a special fund had been established to pay for Catherine’s consulting fees. She also knew his efforts were the reason that other departments had begun to call upon her for help. But the non-believers, the ridiculers, would always persist. Her ninety-eight percent success rate didn’t matter. The two percent failure was what everyone remembered.
A steady rain began to fall as the whisper reached her ears again. Please don’t leave me here.
“I won’t, Timmy,” she murmured, kneeling by the creek and closing her eyes again. Reaching out with her mind, she searched for the small thread of energy she knew was there somewhere.
“Catherine, we’ve got to go.”
“Go ahead and call off the search, Cody,” she answered in a matter-of-fact tone. “I’m staying.”
A strange throbbing started deep inside her head, drowning out the words she knew Cody was saying. The scar on her chest burned, as if someone had suddenly poured gasoline on it and set her on fire. She stood up slowly, catching her breath against the fiery pain as her feet moved involuntarily, trudging into the cool water that swirled around her ankles. The pool deepened, reaching her waist. The swift current pushed her downstream on unsteady feet that no longer seemed to belong to her. A thick layer of fog surrounded her, until she could no longer see the opposite bank.
“Catherine, where the hell are you going?”
Cody’s voice sounded distant. She heard his radio crackle as he called out to the search team and his muffled oath as he splashed through the water, following her across the creek.
The throbbing subsided to a dull ache in the center of her forehead, but the scar continued to burn with fiery insistence, and her feet still moved against her will. The water became shallower, and her feet sank into mushy sand as she climbed the bank of the creek into an open field that led to a cliff overlooking the river.
The fog had dissipated here, and Catherine could see the edge of the cliff. A single oak tree stood outlined against the black clouds rolling across the sky. The jigsaw puzzle came together. The pieces started to fit. The pain subsided, but her feet continued to move, carrying her closer to the edge. She wanted to stop, but an unseen force kept her going until strong arms closed around her, jerking her backwards just as her feet slipped over the edge.
“Jesus, Catherine. What the hell are you doing?” Cody gasped between labored breaths.
“I don’t know. I was… I didn’t…” Catherine tried to clear the fog from her mind, grasping to explain what she didn’t understand herself. “Cody, the tree. It’s the same tree in my vision. He’s here. I know he’s here.”
“Okay. Okay. Give me a second.” Some of her excitement registered in his voice. The tree had been the one clue missing from all the other ravines.
The two crept slowly toward the edge of the cliff. A blanket of fog covered the earth thirty feet below, but they didn’t need to see through the fog. Less than five feet down, on a jutted outcropping, lay the remains of Timothy Bond.

Catherine stood near the edge, listening as Cody gave directions to the search team. A feeling of peace settled over her. She’d found him. “It’s time to go home, Timmy,” she whispered.
“Don’t get too close to the edge, Catherine.”
She didn’t bother to answer, as the wind chose that moment to switch direction and force her back from the edge. Catherine shivered as icy fingers raced down her spine. The sound of laughter echoed on the wind, followed by a whispered challenge: Find me.