A long-time fan of DI Lorne Warner and the Justice series, and more recently a fan of the DI Hero Nelson series I was thrilled when Mel announced she was combining the two characters for a new novel.  Both characters have strong personalities, and both are willing to step outside the boundaries when necessary. Would they be able to work together?

Due to family problems I was a little late on starting my ARC and had the advantage of reading other reviews which touted this as Ms. Comley's best book yet.  This made me even more eager to dive in with a fresh cup of coffee and bury myself in the pages. In my opinion it was going to be hard for her to top my two favorite reads--Dubious Justice and Cold Case from the DI Sally Parker series. Those two books left an emotional impact with me that kept me thinking of them long after I finished the books, and they still remain at the top of my list for favorite reads.

To coin a British phrase I did find Heroic Justice 'bloody brilliant'.  As an author myself I may notice things that I wouldn't perhaps just reading a good book. I'm not a huge fan of narrative and love character driven fiction. Heroic did not disappoint. At times I felt I was in the room with the characters listening to the conversation as Ms. Comley weaved in background for both characters so seamlessly that I was awe struck. Absolutely brilliant! Readers who have never opened a Justice book or a Hero book will still feel they know the characters intimately. Readers who have followed these characters as I have will thoroughly enjoy the revisiting of the past through conversation, not an info dump.  Can I saw 'brilliant' again?

In today's world serial killers are more the norm than the exception. Often to find them you have to understand their motives. Both Lorne and Hero do an excellent job of delving deep into the few clues the killer leaves behind. Having experienced tragedy in their own lives their compassion for the victims and their families is heart-warming. An excellent police procedural.

I would definitely tag this a five star read for lovers of crime, police procedure and fast-paced thrillers. I loved seeing Lorne and her husband, Tony, working together and hope that becomes more of the norm in future novels. I can't imagine working with my husband, but the mutual respect Tony and Lorne have for each other, and the skills each possesses makes them a perfect working couple. So often we get a one-sided few of characters and experience only their work, but Ms. Comley is delightful in her ability to show the many facets--even flaws--of each character, including the antagonist.

I recommend setting aside some time before you start, as once you get involved you're not going to want to stop reading until the very last page...and even then you may find yourself thinking about this book. Available for pre-order now.  Release date--11/13/17.

Posted by Linda S. Prather at 1:58 AM No comments: 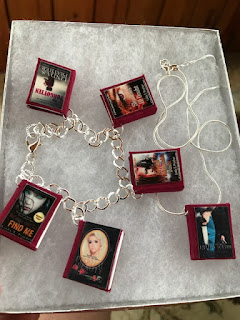 One of my favorite things with fans and new readers is to design and offer unique prizes as keepsakes.  If you love mysteries, thrillers, suspense novels and special gifts from the author then sign up for my newsletter at: lindasprather.com

Christmas is just around the bend and I'll be choosing 10 lucky winners for keychains and necklaces of their favorite book of mine.

Posted by Linda S. Prather at 4:33 AM No comments:

All releases are exciting, but I’m super-excited about this one because I fell in love with the characters.  I believe every woman or even man who has been traumatized by a situation will have an empathy with Andi and her struggles to overcome the demons in her head, left by a man who kidnapped and tortured her for three days. Her belief in a young girl’s story, even against the odds, and determination to help her no matter the personal cost gives you an insight into her character. Her side kick, Shamus O’Conner is witty, loyal and the kind of true friend we all wish for in life.

Ten years ago, Andi Carter was abducted by her lover’s partner, Richard Thomas, and tortured for three days. Rescued by the man she believed responsible, Andi lost everything: the man she loved, her promising future as an investigative reporter and her memory of the weeks leading up to her torture.
“Tell me what I want to know and I won’t hurt you again.”

Thomas’s voice haunted her dreams, sending her into the pits of depression to seek solace in a bottle of whiskey until a young woman reaches out for help.  Twelve young girls have been brutally murdered, their bodies hidden beneath concrete structures. The thirteenth victim is fighting back the only way she knows how, and telling their story to the one person she believes will listen. “I killed a man yesterday, and today I’m going to kill another one.”

“Tell me what I want to know, and I won’t hurt you again.”

Andi Carter stared into the deep-green eyes of Richard Thomas as she tried to collect enough saliva to swallow. Pain had dulled her senses, and her throat was raw from screaming. She wasn’t sure she could speak, or if she did somehow manage to utter a few words if they would be coherent. “I don’t… I don’t know what you want… to know,” she whispered.

Thomas sighed as he followed her gaze to the door leading out of the basement. “Still think Jerry is going to barge through that door and save you, Andi? He isn’t, you know. In fact, dear old Jerry is the reason you’re here. He’s the one who told me what you were up to.”

A burning river of rage flowed through her, much like the sensation from the whiskey he kept forcing her to drink, but instead of dulling her senses, it cleared her mind. He’s going to kill me anyway. “Jerry Palano is a good cop. Scum like you would never understand that. If he told you anything it was because he was your partner and he trusted you.”

He flashed his even white teeth, but the green of his eyes darkened. “That’s my Andi, spirited and loyal to the end. Would you like a drink?” He reached for the bottle of whiskey on the table. “If you spill it, you know it’s going to hurt.” He inserted the tip of the bottle between her lips. “Drink up now, like a good girl. Then we’ll talk some more.”

Andi tilted her head back, guzzling the alcohol. Tears ran freely down her face as a tiny stream of alcohol dripped from her chin onto the raw, blistered flesh of her legs. The pain was excruciating, and she struggled not to scream as she continued to drink, praying for oblivion.

Only when the bottle was empty did Thomas pull it away and pick up the scalpel. “Tell me what I want to know, and I won’t hurt you again.”

“Gambini! Gambini was running young girls. I was going to expose him.” She began to slur her words, which sounded as if they came from a long way off. “Please. Please just kill me.”

Thomas began to laugh, his roar filling the damp, musty room. “I can’t believe that crap actually works.” He leaned in close, his breath hot on her cheek as he whispered, “I’m not going to kill you, Andi, but you’re going to wish I had.”

His threat seeped through the alcohol-induced fog as bile rose in her throat. A tiny pinpoint of satisfaction surged through her as she opened her mouth and spewed vomit on both of them.
“Son of a bitch.” Thomas leapt up, knocking over his chair. “You’ll pay for that, Carter.”

Andi tried to smile, but the acidity of the vomit had reignited the pain from her cuts and burns. She began to tremble, her breath coming in short gasps as she watched his hands clench and unclench. Three days as his captive had convinced her of one thing—Thomas was crazy. His moods swung from euphoric enjoyment of torturing her to angry depression, and occasionally to apologetic sympathy for having caused her pain. I don’t really want to die.

Thomas pushed the table bearing his torture instruments into her view and lit the blowtorch. “You shouldn’t have done that, Andi. I was going to let you go.”

“Please don’t, Richard. I told you what you wanted to know. You promised you wouldn’t hurt me again.” She struggled against the ropes binding her arms and legs.

He studied her, tilting his head to the side. “I did, didn’t I?” His lips puckered as he turned off the torch. “Perhaps I’ll give you some time to think about your apology.” He leaned in close, staring directly into her eyes. “Your punishment will depend on just how well you can beg.”

Sobs shook her body as she watched him leave, the heavy steel door slamming behind him. The alcohol had dulled the pain in her body, but not the emotional devastation of realizing Jerry wasn’t going to save her. He betrayed me.

Time passed as she drifted in and out of consciousness until a scraping noise at the door jerked her wide awake. The door slowly swung open and Stuart Gambini peered inside.

“Jesus.” He crossed the room and knelt in front of her then grabbed the scalpel on the table and quickly cut the ropes around her wrists and ankles. “I’m gonna get you out of here. Can you walk?”

“Why? You’re just going to kill me anyway. Do it here,” Andi croaked out. Her mind was still fuzzy, but she was pretty sure Gambini was the reason she was here.

Gambini frowned, took off his jacket, and lifted her from the chair. “We can talk about that later. Here, wrap this around you. Patrick is waiting for us at the top of the stairs.” He slipped her arms through the sleeves and pulled the coat up around her shoulders.

“How did you find me?” Andi leaned against him, taking a step toward the door, leaving small smears of blood on the floor from her swollen feet.

“I’ve had my girls watching Thomas. This is the only place he kept coming back to.” Stuart placed an arm around her and half lifted, half dragged her toward the door. “We don’t have a lot of time.”

She placed her right foot on the first step. Taking a deep breath, she raised her left foot and put it on the second step. “Where are you taking me?”

“Put your arm around my neck.” Stuart tightened his hold around her waist, placed an arm under her legs, and picked her up. “We’ll hide you at the boarding house for the time being.”

Andi leaned into him and placed her head on his shoulder. “I need to call the Tribune. I was on a case, and they must be going crazy wondering what happened to me.”

“You’re old news. They gave up on finding you after the first three weeks.”

Stuart grunted as he took the last step. “Honey, you’ve been missing for over a month.”
Darkness closed in around her. A month? What the hell did Thomas do to me before he tortured me?

Posted by Linda S. Prather at 9:57 AM No comments: