Horror, Suspense, Mystery and Paranormal - not for the faint-hearted:

DEEDS OF MERCY by M.P. McDonald In No Good Deed: Book One in the Mark Taylor Series, Mark Taylor discovers first hand that no good deed goes unpunished when the old camera he found during a freelance job in an Afghanistan bazaar gives him more than great photos. It triggers dreams of disasters. Tragedies that happen exactly as he envisions them. He learns that not only can he see the future, he can change it. In Deeds of Mercy: Book Three, an unexpected visitor from Mark's past brings him unwanted attention from the authorities. Unable to decide who is friend and who is foe, Mark becomes a fugitive from the law, but with thousands of lives at stake, he is forced to put aside his fear of capture, and instead, seek help from his pursuers.

CRUEL JUSTICE by M.A. Comley The headless body of a wealthy widow is discovered decomposing in Chelling Forest. Then a second victim is found. Detective Inspector Lorne Simpkins and her partner, DS Pete Childs are assigned the case. Before they can discover the identity of the killer they must make a connection between the two victims. After a third murder, Lorne receives a grisly surprise. Clearly, a vicious serial killer is on a rampage...and Lorne has become the killer's fixation. Lorne can't allow her failing marriage or her new boss--a man with whom she shares a sensuous secret--keep her from focusing on her job. She must catch the macabre murderer, or risk becoming the next victim.

THE DEVIL IN THE WOODS by Heather Graham In this novella by NYT bestseller Heather Graham, Christina Hardy and Jed Braden (The Seance) head down to Miami to help out when there's a death in a friend's family. But the old family residence, in a little known overgrown area of the beach , was filled with legends, especially that of a "devil in the woods." Strange events begin to occur, and the group is left to wonder if the stories they told around campfires on dark nights as children might have some essence of truth. Is murder always committed by men, or does a demon lurk in the mangroves and the water, and prey upon the unwary?

THE UNSEEN by Alexandra Sokoloff A terrifying novel of suspense based on the Rhine parapsychology experiments at Duke University After experiencing a precognitive dream that ends her engagement and changes her life forever, a young psychology professor from California decides to get a fresh start by taking a job at Duke University in North Carolina. She soon becomes obsessed with the files from the world-famous Rhine parapsychology lab experiments, which attempted to prove ESP really exists. Along with a handsome professor, she uncovers troubling cases, including one about a house supposedly haunted by a poltergeist, investigated by another research team in 1965. Unaware that the entire original team ended up insane or dead, the two professors and two exceptionally gifted Duke students move into the abandoned mansion to replicate the investigation, with horrifying results.

THE GIN PALACE by Daniel Judson Declan “Mac” MacManus, some-time PI turned full-time Southampton cabbie, has had to endure much in his young life: the loss of family and friends, grave bodily injuries at the hands of ruthless enemies, and the knowledge that more than a few lives have been shattered by the decisions fate has forced him to make. But nothing of what Mac has encountered—and nothing of what he now knows about his own mysterious past—can compare to what awaits him in the heart-pounding final installment of The Gin Palace Trilogy. On a cold winter night, a troubled woman enters Mac’s cab and within moments sets into motion a series of devastating events that will test the young MacManus to his very soul. As he chases down leads, and his losses once again begin to mount, Mac finds himself dangerously close to a line he swore he’d never cross. And when one utterly unbearable loss threatens to transform him into an avenging angel, it is an unlikely ally—a stranger stalking him like a shadow—that may very well be the difference between Mac’s final act of self-destruction or his ultimate salvation.

THE FOREVER GIRL by Rebecca Hamilton "Whatever you do, fight." Sophia's family has skeletons, but they aren't in their graves. At twenty-two, practicing Wiccan Sophia Parsons is scratching out a living waiting tables in her Rocky Mountain hometown, a pariah after a string of unsolved murders with only one thing in common: her. Sophia can imagine lots of ways to improve her life, but she'd settle for just getting rid of the buzzing noise in her head. When the spell she casts goes wrong, the static turns into voices. Her personal demons get company, and the newcomers are dangerous.

BET YOU CAN'T FIND ME by Linda Prather
Imagine a killer who can kill at will from a distance. No gun, no weapon. Nothing more than a thought.
Catherine Mans has the ability to see and hear what others can’t. With the help of Homicide Sergeant Cody Allen, she’s turned that talent into a successful profession as a psychic consultant.
But Catherine’s past is coming back to haunt her. Someone is threatening the lives of everyone she loves.

Nine bodies have been discovered, and Catherine is the FBI’s prime suspect. To prove her innocence, she must unravel the secrets of her past, and answer the challenge of a deranged psychic.
Bet you can’t…FIND ME! 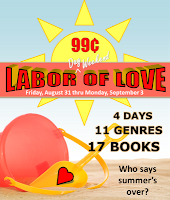 Posted by Linda S. Prather at 5:26 AM No comments:

Growing up I loved romance novels. Loved the idea of being in love and living happily ever after. Somewhere between my early teenage and adult years romance books became a formula - same story, different town or country. And then they really changed. Instead of giving me a tantalizing view of passion that left me breathless and warm all over I got a detailed description of sex. I found myself moving away from the genre as I was no longer entertained, but basically bored.

In the last year I've found myself delving back into the genre with Indie authors.  A new journey, and one so far I'm truly enjoying. Yesterday I started Her Fake Romance by Donna Fasano.  I had work to do, and things I needed to accomplish, but once I started--well, the day was over until the book was finished. I loved it. Loved the story, the characters and yes--I loved the ending.

Ryan need a female partner to escape the amorous advances of a friend's daughter, and Julia needed to show her teenage daughter she wasn't just a workaholic, and that she did know how to have fun. Neither believed in love or happy endings and neither wanted a "relationship".   They became the perfect "fake" couple.

Looking for characters true to life, and a story that will pull you in from the very first page and keep you there all the way to the end?  Don't miss this one!


Other books by Donna Fasano

Mystery Friday - 26 - $.99 mystery/thriller/suspense for your Kindle

Prices may be subject to change without notice - above prices were in effect on 8/10/12
Posted by Linda S. Prather at 5:49 AM No comments: