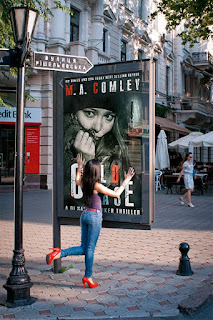 Bosses can sometimes be the pits, don't you think? Expecting the impossible. That's how I felt when Sally Parker was handed a ten year old cold case--and given only a few days to solve it, while continuing to work the regular cases that came in. I had to wonder for just a moment if he wanted her to fail. Her team was also shocked, but willing and able to jump in and give it their best.

One of the most wonderful things about reading Cold Case was the feeling you were there for a ride-a-long with the team. A superb police procedural.

Anyone connected to the judicial system or law enforcement will grasp immediately the issues related to trying to reconstruct a ten year old murder case. Witnesses forget things, suspects have disappeared, but even worse you have to step on the toes of your fellow officers who originally investigated the crime. Uncovering the mistakes of a fellow officer leads to another dilemma--do you let it go, or turn them in? Sally is faced with all these questions and more.

Another wonderful thing about reading Cold Case was the true life addition of scenes involving Sally and her team's real life issues. These brief glimpses into the everyday problems of working and living, and having someone target you for revenge, add a special touch to both the characters and the plot. There's nothing one-dimensional about this book.  A complex plot with well-developed characters that pulls you in from the very first page, and doesn't let go until the last word.

Although I tagged this early as a police procedural, I would also have to add the tag thriller due to several very suspenseful moments, and mystery as the ending will both surprise and shock you. Everything a great mystery should do.

Highly recommended to fans of mystery, thriller, suspense and police procedural--as well as fans of true crime, as it truly reads like true crime.  Another excellent addition the the Sally Parker Series. Haven't read any of the earlier books?  Check out Wrong Place and No Hiding Place. You won't be disappointed.