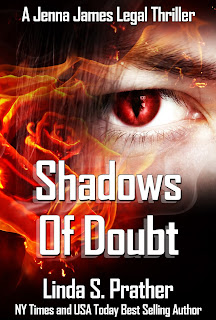 All Amazon Sites - Shadows of Doubt

Kerri studied the notes she’d added to the diary, comparing them to the ones before. The writing was close, but a handwriting expert would see the subtle differences. She would eventually have to recopy the entire book just in case it was ever found. His legacy had to live on without blemish.
“But what about your legacy?”
She ignored the voice in her head, much as she’d ignored Keira most of their life. She would have her legacy in time, but not until Simone’s work was finished, and not until the world was ready to recognize her talent as an artist.
She closed the book, picked up her glass of wine, rose and went to study the painting of Jake Savior she’d hung on the den wall. Simone would have been proud of her. It was some of her best work. She’d captured not only his handsome face, but also the quintessence of his soul. She’d painted him while he watched his wife feeding ducks in the park. The deep blue eyes had revealed so much to her. His compassion, and his deep love for this woman. But there were also shadows in his eyes. Shadows of pain and loss not quite forgotten. She knew where those shadows came from. It must have been horrible for an eight year old child to watch his mother beaten day after day until finally in a moment of sheer desperation she attacked her attacker and gave her son a chance to escape and run for help. Help that came, but much too late.
A deep rattling cough came from behind the bedroom door. Kerri’s shoulders slumped, and the hand holding the glass shook as anguish ripped through her like a thousand tiny paper cuts that throbbed and ached. It was their fault Simone had been hurt. He’d been upset because the job wasn’t finished. Like an artist when the painting was incomplete or an author when the book was only half written. No true artist could live with that. It ate away at your soul until you slowly starved to death.
She opened the door slowly, watching the sheet covering the withered, scarred body for any signs of movement that would signal he was still breathing. It rose slightly as another rattling cough shook the bed. She blew him a kiss and closed the door, leaning against it for just a moment to steady herself. He no longer bore any resemblance to the man she’d fallen in love with, but his essence was still in there somewhere struggling to survive. His zest for life was one of the things she’d loved about him.
She poured another glass of wine and went back to the painting. This was the beginning of her legacy. Any normal child would have been driven insane by what Jake Savior had endured with both his mother’s death, and then his father’s subsequent suicide. Instead he’d followed in his father’s footsteps and joined the police force as a champion for justice. People like him couldn’t see the true artistic beauty of Simone’s bombings. Like her, Simone was a true artist. He studied his subjects. Their death was imminent, but Simone made sure they went out in an explosion of beauty.
Her gaze fell on the remaining four paintings sitting near the baseboard. Harry Redmond, Clifford Beaumont, Jenna James, and Marcus Dade. They were all guilty of murdering the heart and soul of the only human being she had ever loved. She would be their judge and jury, and she would mete out justice fitting their crimes.
She picked up her paint brush, and stared into the deep blue eyes of Jake Savior as she sipped her wine. It wasn’t enough just to kill him. She painted a scar running from his right eye to just below his chin. She wanted him to suffer, as she had suffered. To die a little each day as he realized there was nothing left to live for. A soft smile played around her lips as she thought about the plans she’d made. Before she was finished they would all go insane.
A loud moan came from behind the closed door followed by another rattle. She glanced at the syringe and bottle sitting on the coffee table. The doctor had told her the time would come when his suffering would become unbearable. She tossed the paint brush into the fireplace and picked up the syringe and bottle before walking slowly to the bedroom door. It was time for his suffering to end and theirs to begin.