The Most Heart-Wrenching Psychological Thriller You'll Read This Year 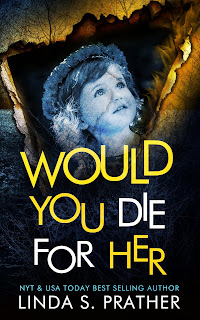 Available during pre-order for $.99

Desperate to block out the screams in the distance, I covered my ears and closed my eyes. “Please, God, please make him stop.”
I’d never believed in prayer, but the screams stopped, or at least I couldn’t hear them anymore.
“See what happens when you make me angry, Dakota?”
I hadn’t heard him come in. I kept my eyes closed as I huddled in the far corner of the cage. A key clicked in the lock. His footsteps approached.
“Look at me!” He grabbed my chin, forcing me to look at his blood-soaked clothes. “She suffered your pain.” He squeezed harder. “Say, ‘Thank you, Christian.’”
Another part of my soul died as her blood dripped from my chin. “Thank you, Christian.”


SOME OF MY FAVORITE EXCERPTS

“Crimson is such a beautiful color, don’t you think?”
The knife slid from my shoulder to my right breast, leaving a tiny trail of blood drops.
“So beautiful against that snowy-white background.” He laughed softly. “It’s the color of my rage.” His eyes darkened as the knife continued its trail down my abdomen. “You made me angry, Dakota. You shouldn’t have done that.”

I cringed as the door was flung open. Each time he’d entered, I’d gone through a new hell. My stomach somersaulted as he pushed the metal stretcher in front of him. “This is why you should never make me angry, love. I do such horrible things when you make me angry.”
The contortions of her face told me the pain she’d suffered. “Please, Christian, take it away.”
“Sorry, darling. I have to go out for a while. Might be gone a day or so.” He patted the bloody head. “I didn’t want you to get lonely. The lovely Simone will keep you company while I’m gone.”

“Browne isn’t a local.” Max shuffled sheets of paper while I sipped my coffee. “He moved here last year from New York. He was a detective with the New York Police Department.”
“That makes more sense. I thought he seemed like a big-city cop.”
Max nodded. “Four years ago, his twin sister, Colleen Browne, was kidnapped. Browne was working a murder case. They used her as leverage to back him off.”
“What happened?”
“He found the murderer and put a bullet between his eyes.”
“Don’t be a smartass, Max. What happened to his sister?”


“They mailed her back to him in pieces.”