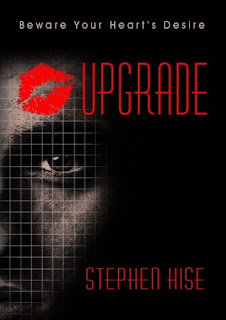 Upgrade by Stephen Hise (Goodreads Author)
Upgrade 4.82 · rating details · 11 ratings · 8 reviews
Brent Schoenfeld is wealthy but unattractive. He is getting an upgrade that will dramatically change his life. Whole new worlds of possibilities will open up to him. Dreams come true; nightmares do, too. Stephen Hise has worked in the field of emergency medical services (EMS) since the age of seventeen. Stephen was a paramedic by age nineteen, and worked his way up through the system to become one of the few people to have served with distinction in two states as State EMS Director. He currently lives in Phoenix, Arizona where he works as a consultant and author.

What are Reviewers saying?

5.0 out of 5 stars Entertaining and well written!, December 7, 2011
By Sue P - See all my reviewsThis review is from: Upgrade (Kindle Edition)
Let me begin with the ingredients: Take a decent amount of science, add to this quite a lot of sex, then introduce mystery and intrigue, mix it all up, give it a twist right at the end and you have a superb , end product-Upgrade!

The author's way with words and jaunty style of writing makes this book a very lively and entertaining read. He tells the tale of an unattractive but wealthy man seeking to change his life by neuroscience .The procedure is successful and we follow the protagonist, Brent Schoenfeld through his new style of life, now focusing on females ( which I hasten to add have very different and colourful personalities of their own )and the exploits in their effort to woo him.
As the story progressed, the author builds up the feeling that something just isn't quite right , the suspense was growing .I actually found myself trying to second guess the ending with all sorts of scenarios and although I got somewhere close , he still managed to outmanoeuvre me with a totally unexpected and dramatic conclusion. Superb twist!

This story is original, sexy, extremely well presented with excellent grammar and editing. Also, in addition to the clever mix of genres, the author also incorporates a serious message with this book ; be careful what you wish for , the grass isn't always greener on the other side!
I enjoyed Upgrade from the first page to the last and I will now look forward to reading anything else Stephen Hise has to offer. He is talented to say the least!


5.0 out of 5 stars Expect the Unexpected., December 7, 2011
By K. S. Brooks "ksbrooks" - See all my reviews
(REAL NAME) This review is from: Upgrade (Kindle Edition)
I'll admit I had no idea what I was getting into when I started reading Upgrade. I'd read a few of Stephen Hise's blogs and found his wit and writing ability both impressive and refreshing. I wanted to see what his book was about. From all the buzz, I thought it was going to be a futuristic psychological thriller - and I wasn't far off.

Stephen Hise has written a piece of work that amazes me. I'm a very picky reader - one who gets easily bored and skips over bits and pieces and paragraphs, and sometimes even pages. I read every word of Upgrade. Not only did I read every word, each page turned nearly on its own, beckoning me with the tease of knowing something was going to happen - something that I didn't see coming. And it was right about that.

Upgrade's theme reminded me of Oscar Wilde's "The Picture of Dorian Gray" as it's about a man whose good looks undermine his good nature. It reminded me of "The Sixth Sense" because the end slaps you in the face and sends your mind reeling back over the rest of the book to check and see where you should have picked up on the clues. They are there. You're just so wrapped up in the story that you didn't see them.

Hise's talent for writing sensual scenes is evident. The pace of his writing is fluid and carries the reader along nicely. His style is almost minimalistic - but in a good sense. It's not burdened with lots of description and it doesn't need it. Something about Upgrade draws you to focus on the characters whilst the scenes somehow set themselves.

Some folks are going to expect `psychological thriller' to include a lot of action. Upgrade's not that kind of book. It's got a "Twilight Zone" kind of feel to it, but you don't realize that while you're reading it. Frankly, I could see Upgrade becoming a series which follows different people and how they deal with the interesting cosmetic `reprogramming' procedure that is the foundation of this book.

Upgrade wasn't what I was expecting, yet was more than I expected at the same time. How is that possible? You'll have to read it to find out. I give it five stars.

5.0 out of 5 stars Very interesting, November 3, 2011
By Lady Wings (South Carolina, USA) - See all my reviewsThis review is from: Upgrade (Kindle Edition)
Stephen Hise's idea of enhancements to a person's outward appearance made me start thinking, would I like this or not? It did lead his central character, Brent, into a very sticky situation, actually several sticky situations.
I enjoyed reading this novel even though it is not in the genre I usually choose my books from. The characters are well developed and I truly felt sorry for a couple of the ladies in Brent's life, while not being too fond of another one.
The ending was a surprise. Even though I tried to guess what was going to happen, I was not totally prepared for the final outcome. I recommend Upgrade to anyone who likes a different approach to getting the perfect lover.

5.0 out of 5 stars No upgrade needed!, October 7, 2011
By Alex Canton-Dutari (Panama City, Panama) - See all my reviewsThis review is from: Upgrade (Kindle Edition)
Upgrade by Stephen Hise
Reviewed by Alex Canton-Dutari
Nothing will hook me to a book faster than a hint that the plot is based on some interesting psychological aspect. I was not disappointed.
The reader will find characters that could be described as having loose morals, though they do not seem to produce any negative reaction as the surrounding society seems to adapt to them... or vice-versa.
I like the way Stephen Hise plays with words, even walking a thin line from a male writer's stand: "A man as handsome as that would never have been interested in her, no matter how smart and good she was."
In the end, even Shakespeare gets a cameo role, which I found quite fitting.
This is a story that does not need an Upgrade.

5.0 out of 5 stars Yummy box of chocs, September 10, 2011
By Vixie UK "vixie666" (london, UK) - See all my reviewsThis review is from: Upgrade (Kindle Edition)
I enjoyed reading this book. It's well-edited and flows along really smoothly. It's also fun. The idea is novel and you dive into the story pretty swiftly. Here you have Mr Average Geeky Guy who would love to be Brad Pitt. The idea is: what would you wish for? And if you get your wish will it make you happy? Surrounded by what you wish for, what option would you choose? Imagine a box of chocolates, all tantalising and yummy... this book is like that. The female characters are all different and well developed (some more than others!!). Everyone is an individual - some have agendas, some don't. Brent is a curious character. Watching him deal with his new-found confidence is cool. What would you do in his position? Would you take advantage? Would you be nice? Would you stay the same? I also loved the ending. A well-written, fun, interesting and original read. I recommend it.

5.0 out of 5 stars Brilliant !, May 30, 2011
By Beeshon - See all my reviewsThis review is from: Upgrade (Kindle Edition)
I do love books that leave you open-mouthed at the end - this was certainly one of them. It is very well written and the author deftly manages to portray the main character, Brent, as a slightly pathetic figure; very rich and successful but lacking in the looks department, so much so he is prepared to undergo an irreversible process to make people or, more importantly, the female of the species, notice him. He is not a likeable character at first because he wants to become attractive to women merely, it seems, for sex. However, as the story continues you warm to him as he tries to focus on doing the right thing by the woman he loves and you almost start to feel your sympathy cords being tugged. The nearer I got to end the more I realised I had really no idea how a satisfying (for a reader) conclusion was going to be reached. I knew from some reviews that there was a surprise ending, and with only 10% to go, I smugly thought I had guessed it. In fact, I only half guessed it. What I hadn't predicted left me speechless.
I liked Stephen's style - I found it sophisticated, and easy-flowing and I had a laugh-out-loud moment when he used a very analogical adjective which was perfect for the situation being described - `Clintonian'. It was brilliantly apt!
There was certainly a very serious moral to this excellent story - be very, very careful what you wish for.


5.0 out of 5 stars Looking for an Upgrade?, May 5, 2011
By Reese Ring - See all my reviewsThis review is from: Upgrade (Paperback)
I thoroughly enjoyed reading Upgrade by Stephen Hise. Having previously heard about the science behind it, this book provided an interesting perspective and storyline regarding that science. I found the male POV in this book intriguing and appreciated his take of the human psyche and relationships. Great twisted ending!
Posted by Linda S. Prather at 11:19 AM