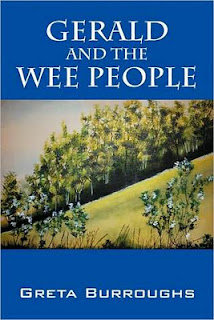 Gerald and the Wee People
by Greta Burroughs (Goodreads Author)
4.50 • rating details • 6 ratings • 5 reviews
An Exciting Fantasy Novel That Takes You To Another World

Gerald and the Wee People is a novel intended for young adults but readers of all ages will get carried away in the world of the Wee People.

Gerald and his best friend, Vernon literally fell into a new world when responding to a plea for help. A few years prior to that, the boys had discovered an unusual clearing in the woods where only Gerald had the ability to watch the daily activities that took place in a miniature village.

When creatures started attacking the village, Gerald became more and more concerned about the little inhabitants that he had become attached to. Vernon humored his friend but became concerned when Gerald mentioned one of the villagers coming to him and asking for help.

To prove him wrong, Vernon agreed to venture out to the clearing late one night and show Gerald it was all in his imagination. Instead, Vernon was drawn into the enchanted vision and both boys charged off to the rescue.

While in the wee people village, Gerald and Vernon try to fulfill a prophecy overcoming many dangers and obstacles. The boys help the villagers in their fight against the misshapen ones while also trying to defeat a powerful being intent on destroying all life.

The characters in the book come to life and will make you laugh, cry and root for the underdog. Gerald and the Wee People is an action packed fantasy adventure that will keep you spellbound until the last page. 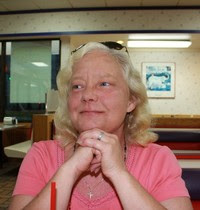 Greta Burroughs loves to read. No matter where she is, there is always a book close at hand. Her love of reading began at an early age and blossomed over time to include many different genres, her favorite now being fantasy.

As a preschool and elementary school teacher, Greta tried to instill the joy of reading in the children she worked with. Books were an important part of her classroom and story time was the highlight of the day.

It has been a while since Greta was in a classroom but she had lots of experience in reading to children of various ages and remembers what they enjoyed listening to. She tries to incorporate that knowledge into her work as an author and believes it makes her a better writer of children’s books.

The adventures in Patchwork Dog and Calico Cat were written several years before the book was published. The manuscript was put away while she concentrated on her career as a freelance journalist and before that in aviation education. When medical issues kept her from being able to work outside the home, the writing bug hit her and the old manuscript was dusted off, rewritten, illustrated and published.

Greta’s one nonfiction narrative, Heartaches and Miracles describes the roller coaster ride she has been on fighting an autoimmune disorder called ITP. She has also published a young adult fiction fantasy novel entitled Gerald and the Wee People and has plans to write a sequel to that called The House on Bo-Kay Lane. That is not the end of her literary itinerary; Greta has several other children’s book in mind for the future.

WHAT REVIEWERS ARE SAYING!

Easy reading and good, December 8, 2011
By Liz Fed - See all my reviewsThis review is from: Gerald and the Wee People (Paperback)
If you like Harry Potter series and the Lightning Thief you will enjoy this book. Easy reading and enjoyable. The story of two boys and their journey with a village of wee people is intriguing. Come and join them in their adventure in saving the village.You wont put the book down. Help other customers find the most helpful reviews.

5.0 out of 5 stars Gerald and The Wee People, December 7, 2011
By HeyJude - See all my reviewsThis review is from: Gerald and the Wee People (Kindle Edition)
I worked with Greta in the newspaper business and was her editor for several years. She has a great writing voice and when she tells a story you become part of it.
I loved her first book, Gerald and The Wee People, and read one of the first editions she received. This is a great book for young readers and many ages will enjoy this magical tale. I highly recommend it as a Christmas gift for children.
Greta is a great writer and I am so happy to see her fulfilling her dream and becoming an accomplished author. I cannot wait to read her newest book!
Once again, if you are buying a book for a young reader then look at this! A great book to read to your children and grandchildren. You will not be disappointed!

4.0 out of 5 stars Coming of Age, December 7, 2011
By D. Williamsen - See all my reviews
(REAL NAME) This review is from: Gerald and the Wee People (Kindle Edition)
In "Gerald and The Wee People," Greta Burroughs speaks to the imaginations of young adults as she catapults Gerald and his best friend Vernon into another world, stretching their ability to believe what is happening. Beyond the strangeness of this new world, however, they soon realize that it mimics their own in many ways. The pettiness, the prejudices, the love, the caring--both the good and the bad exist in both worlds, all contributing to the drama in their lives.

Gerald and Vernon find themselves in a surprising position, one for which they feel ill-equipped, because the wee people are inexplicably depending on them to help defeat their enemy. In the course of fulfilling their destiny, the mettle of the two boys is tested to the point of breaking. In my opinion, this young adult fantasy novel can be especially viewed as a coming of age story for Gerald as his experiences among the wee people contribute to both his psychological and moral development.

Greta Burroughs has a soft spot for children, and it shows in the way she is able to write from their perspective. This story would be enjoyable for adults as well, at least those who still have a little child inside who's alive and well!

4.0 out of 5 stars Great Book, October 19, 2011
By Sue Owen - See all my reviewsThis review is from: Gerald and the Wee People (Paperback)
I really enjoyed reading this book. The author took a few plot twists that I probably wouldn't have taken and when I read them I wondered how in the world that was ever going to work out but I have to say she surprised me every single time. I fell in love with the wee people and especially the far-seers. As far as I'm concerned they were the heroes here.

The world created by Burroughs was fantastic. I got lost a couple times with where the boundaries were but the story didn't really need them. As the group traveled the world just seemed to go with them. Still a bit unclear on that but I don't feel I've missed out on anything.

The plot was fun, the story believable, the outcome wonderful and the entire book was entertaining. I wouldn't mind coming back to visit the wee people once in a while and probably will!

5.0 out of 5 stars Cool things come in small packages, October 8, 2011
By Vixie UK "vixie666" (london, UK) - See all my reviewsThis review is from: Gerald and the Wee People (Kindle Edition)
This book opens with Gerald trying to persuade his sceptical best buddy, Vernon, to go down to the woods to help the Wee People who he has been seeing in visions since they were at school. Like all good adventures, we have a character who believes & a character who disbelieves... even what he's seeing. This is a book that teens & adults will enjoy, I think. It's good for young readers and there is enough going on to keep adults interested. I like fantasy books where the author builds a new world for you to exist in for a while. This is an enjoyable read and there are a variety of characters here. There's also some morals and lessons to be learnt. Some characters grow, others... The interaction is good and the conversations natural. One of my favourites is the girl who is quite hot stuff - you'll have to read to find out who I mean. I like the ending - everything is tied up at the end, but there is a strand or two that can be picked up in book two, and I look forward to reading it.

5.0 out of 5 stars A wonderful fantasy, July 21, 2011
By Robert H Burroughs - See all my reviewsThis review is from: Gerald and the Wee People (Kindle Edition)
Gerald and the Wee people is a wonderful fantasy novel originally meant for young adults but equally enjoyable by older readers. The plot is well developed,the characters are believeable and the dialog well written.
While walking in the woods Gerald and his friend Vernon accidently fall (literally) into the world of the Wee People who are engaged in a war with monstrous beings from the deep forest. Using modern thinking and making unique weapons the boys help the Wee People conquer the monsters and the evil forest god that controls them. A classic triumph of good over evil.
The book is not overlong and this is a good thing since once the reader begins it is difficult to put down. Two things that impressed me about "Gerald and the Wee People" are the total lack of scatalogical language and that it does not have a dark theme as in much of the current young adult fiction.
Robert F. DeBurgh.

4.0 out of 5 stars great adventure, June 6, 2011
By Mary Daugherty "author, writer, reviewer" (radcliff, kentucky) - See all my reviews
(REAL NAME) This review is from: Gerald and the Wee People (Kindle Edition)
In a clearing, in the dark woods, is a secret society of wee people and Gerald, with his friend Vernon, has just stumbled into a wee war. With wonderful imagery and imagination, Burroughs takes her readers into a magical world filled with terror, adventure and an unsuspecting hero.

Gerald and the Wee People is a book that brings the impossible to life and takes the reader right along with it into a battle that may mean death for the wee people. Without the help of Gerald, who doesn't even know how to help, and his best friend Vernon, all may be lost. With an "Alice in Wonderland" feel, Gerald is shrank down to wee size and is at the mercy of the attacking misshapen ones along with Sheela, Cian and Sean. Can Gerald save himself and his new friends or will they all cease to be.

This is a great story of courage, faith and friendship for any age. Young adults and more mature juveniles ( some violence) will enjoy the action and adventure that Burrough's characters bring to the reader. A pleasurable read and very talented writing make this book a winner. Makes me want to go look for the magic in my own back yard.

5.0 out of 5 stars What a pleasure!, June 2, 2011
By Alex Canton-Dutari (Panama City, Panama) - See all my reviewsThis review is from: Gerald and the Wee People (Paperback)
I love fantasy, especially when it is laced with spices of reality. The adventure of Gerald and Vernon had me traveling from Lilliput to Oz, and even taking a pinch of primitive science. I never thought of someone else thinking about using old bread mold to elicit its antibiotic properties....
Ms Burroughs was able to create easy dialogues among almost familiar creatures, without messing my head with complicated names. This novel was a pleasure to read.

SMASHWORDS
Posted by Linda S. Prather at 4:57 AM