If you love The Mentalist - Check out - Bet you can't... FIND ME 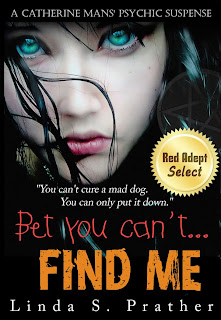 “Imagine a killer who can kill at will from a distance. No gun, no weapon. Nothing more than a thought."

Catherine Mans has the ability to see and hear what others can’t. With the help of Homicide Sergeant Cody Allen, she’s turned that talent into a successful profession as a psychic consultant.

But Catherine’s past is coming back to haunt her. Someone is threatening the lives of everyone she loves.

Nine bodies have been discovered, and Catherine is the FBI’s prime suspect.

To prove her innocence, she must unravel the secrets of her past, and answer the challenge of a deranged psychic.

"If you love the psychic suspense of Kay Hooper and the witty characters of Tammy Hoag, you'll love Find Me!"

She rose and opened the door to the basement, ignoring the shrieks and clang of the chains. Her feet descended the steps slowly, the old woman’s words echoing inside her head: You can’t cure a mad dog, Aggie; you can only put it down.